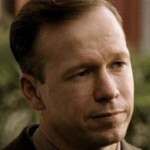 As he moved from the elevator to his position behind Taggert, facing to the right from the point of view of the elevator, Kellser heard the unmistakable sounds of a motion tracker echoing around the room. He grimaced when he stopped behind Taggert, muttering a curse in his head. He was briefly thinking of how to work around this when a voice called out from the shadows.

Well, shit, Kellser thought. The voice had a distinct quality to it indicating whoever had spoken was wearing a facemask of some kind, and the sounds of heavy boots he heard meant armor.

They probably had some firepower, too.

Kellser put himself in his enemies' shoes and thought of their situation. At least two men with armor, weapons, flashlights, and a motion tracker sweeping the cargo hold. They hear the elevator open, and their trackers show brief movement before it stops, meaning they didn't move very far and are probably still around the elevator.

They probably know our general location, and we can't move to flank 'em without them knowing. Shit. Well, at least they think we're unarmed.

And they turned off their flashlights.

That realization clicked with something n Kellser's head. They were literally just as in the dark as Kellser and Taggert were, maybe even more since their eyes had been used to the flashlights and now had to readjust. This spawned an idea in Kellser's head that was either incredibly ingenious or incredibly stupid.

He turned to Taggert and tapped him on the shoulder to get his attention before whispering as quietly as possible to him, "Listen for the tracker, but watch your sector." He motioned to area before Taggert as he said the last part before continuing, "If anyone comes into it, blast 'em."

Kellser then turned, crouched down, and slowly creeped alongside the cargo container to the corner before him. He kept his ears open for the motion tracker as he went, and stopped on his right knee once he was at the corner. He peered around it to reveal as little of his head as possible, and was able to just make out the shape of another container, this one at an angle to the one he was currently behind. Switching the Px4 to his left hand, Kellser began using his right to untie the laces of his left boot.

"My name is Corporal Kellser, United States Colonial Marines," he said as he managed to loosen the laces and remove the boot, ignoring the discomfort of the cold floor sending its chills through his sock. "You are illegally boarding a sovereign vessel of the United Americas. If you do not cease and desist and leave immediately, you will be brought to trial and subjected to judicial punishment." As he said the second part of his decree, Kellser used his right hand to give an underhand toss, sending the boot skipping and tumbling along the floor towards the oddly placed cargo container before him, his words masking the exact sounds it produced.

Meanwhile, he watched the area before him for any movement, and listened for the motion tracker and any approaching footsteps.

((OOC: If the elevator is the east side of the room, Kellser's at the north corner of the cargo container before the elevator, tossing his boot to the container immediately to the west.))
Top

:: Merric hears the distinct sounds of a motion tracker, boots of heavy tread and the sounds of breathing under a face mask ::
:: A muffled voice calls out to them ::

:: Merric feels Kellser move in close and tap him on the shoulder before quietly saying ::

"Listen for the tracker, but watch your sector." He motioned to area before Taggert as he said the last part before continuing, "If anyone comes into it, blast 'em."

:: Merric nods to himself, sensing Keelser pull back to his original position ::

::Merric hears keelser doing something he can't see from his position and speaking up to be heard ::

"My name is Corporal Kellser, United States Colonial Marines,You are illegally boarding a sovereign vessel of the United Americas. If you do not cease and desist and leave immediately, you will be brought to trial and subjected to judicial punishment."

:: Merric smiles to himself, as his mind catches up to what Kellser might be trying to do ::
:: Merric keeps his weapon tucked in close so as not to expose the barrel prematurely, ready to fire the weapon close to his chest keeping an eye on his sector ::

:: His mind always working, offers up the latest statistical probability of success for the 'mission' of repelling the boarders to 30% given the severe disadvantage they have to their invaders, luckily Merric has learned that math problems and reality never seem to meet up when it comes to the human factor of the USCM ::
Top

GM
The motion tracker beeped a few times, and the intrepid duo could hear the boots pivoting to track whatever the device had picked up.

“Come out of that corner!” the voice yelled at the boot’s corner, not realizing what was in the corner. “We mean you no harm! Surrender yourself and we will ensure that you will be treated in accordance with the highest standards of the Union of Progressive Peoples!”

The boots walked up into the corner, and Kellser could make out the silhouette of the man as he walked. He was obviously green; not thinking at all to check behind the cargo container, the man’s short stature suggested that he was fairly young. A bullpup rifle, a top-of-the-line Hahne-Kedhar carbine, was in the small man’s hands while a W-Y PDW was in a holster on his right leg. The man was encased in what looked like a zero-g atmo suit, with flak armor and tactical webbing draped over the bulky rebreating enclosure and helmet. Most notably, he hadn't spotted Kellser yet, instead fixated on the corner where he believed the motion had come from.

“You are out of your jurisdiction here, Colonial Marines. You have violated an inter-colonial treaty by entering a no-fly zone. We are operating in accordance with intercolonial treaties by boarding your ship to ensure that its contents do not pose a threat to Union assets in this region” the second voice spoke. The second man was still on the other side of the cargo container, and had not moved into the open. He was evidently the one holding the motion tracker, as the first figure was approaching the corner, rifle in hand. This voice was older, more experienced, more mature; probably the equivalent of a fireteam leader. The boarding team had obviously decided to quarter and search by twos.
Omega Company Longtime Veteran (since 2005)

“Come out of that corner!”

:: Another Older voice speaks up ::

“You are out of your jurisdiction here, Colonial Marines. You have violated an inter-colonial treaty by entering a no-fly zone. We are operating in accordance with inter-colonial treaties by boarding your ship to ensure that its contents do not pose a threat to Union assets in this region”

:: Merric thinks for a moment then makes his decision as he slips his pistol in the small of his back ::
:: Merric stands and moves with a steady purpose from his position forward past the cargo container he was hiding behind and moves to stand within an arms reach or easy leap of the other cargo container that was farther up ::
:: He calls out in a steady voice adjusting to a more stilted speech format in order to sound more android like some older models still in service ::

I am Technician 3rd Grade Taggert...
Please identify yourselves and state your purpose...
This is a USCM vessel...
You are not authorized...
Please exit this area immediately...

:: Merric hopes that Kellser can use his diversion to get the drop on the eager one since his hearing tells him that only the two boarders are in this area right now ::

:: Merric stands in the open but within easy reach of the other cargo container ready to slip behind it for cover if need be, he stands relaxed putting on an air of aloofness as if his programming is so limited he doesn't register the import of the actual words he is saying, the phrases come out as simple requests for information followed by the repeating of a programmed delivery ::
Top

“Real short version: we’ve been boarded. Cryo revival process was overridden and now whoever they are, they’re down in the Hangar. Kellser and our new synthetic have gone on ahead for recon. They’ll keep in touch via the ship intercom.”

Redds took a glance around the ragtag group, frowning, patchwork forearms folded across his chest. This wasn’t what he wanted to see, waking up. He was on edge himself but not much was showing above the laid-back exterior — at least something was as it should be. “God fuckin’ damnit,” he said, for lack of anything else to say at first. “Officers an’ th’ Tank ain’t out yet, raht? So they ain’t comin’ out?”

With a glance back at Cohen he headed briskly back along the row of sleepers with a sense of urgency in his short stride, glancing at name after name until he got to MGSgt. Abrams, checking the pod for damage and glancing at the man as if he might come awake at any moment.
the ghost of harko has possessed my washing machine please send help
Top

Hoban shook his head, leaning against a wall as Redds walked down the row of remaining tubes, to Abrams'.

"Sweet mother of God, please don't wake up that mean son of a bitch. There is no situation so awful that it can't be made worse by waking up Abrams early. Oh, actually, what we could all do is wake him up then get to sleep as fast as possible, and let him deal with this. His harsh language is the highest caliber ordinance we got."
Top

(OOC: For Hoban, Redds, Thomas, and anyone else not Kellser and Jedi, please continue [url=http://www.colonialmarinesrpg.com/viewtopic.php?f=34&t=113]here[/url]).
Omega Company Longtime Veteran (since 2005)

(( OOC: I need some GM or Kellser input before I try anything else ))
Top

(OOC: Yup, I'm waiting on Kellser. Give him a bit more time; if not, then I'll get something up in the meantime)
Omega Company Longtime Veteran (since 2005)

"Oh, is this some fancy tin can I'm speaking to? Well, according to the Fair Game agreement between you Colonials and us, we've got every right to be here. You come waltzing in, with a ship full of nukes and you grunts, into UPP territory and NOT expect a fight? Fuck this. Kim, pull back for now. We'll radio in; no need to provoke 'em"

The other man turned, and began briskly walking away from Kellser. Two sets of boots clanked down the cargo hold into the next adjoining room. The two Marines could hear the door silently hiss shut, and the cargo bay was silent once more.
Omega Company Longtime Veteran (since 2005)